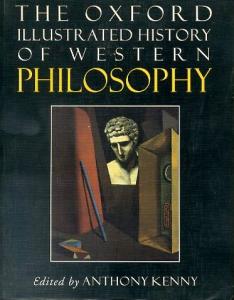 Written by a team of distinguished scholars, this is an authoritative and comprehensive history of Western philosophy from its earliest beginnings to the present day. Illustrated with over 150 color and black-and-white pictures, chosen to illuminate and complement the text, this lively and readable work is an ideal introduction to philosophy for anyone interested in the history of ideas. From Plato's Republic and St. Augustine's Confessions through Marx's Capital and Sartre's Being and Nothingness, the extraordinary philosophical dialogue between great Western minds has flourished unabated through the ages. Dazzling in its genius and breadth, the long line of European and American intellectual discourse tells a remarkable story--a quest for truth and wisdom that continues to shape our most basic ideas about human nature and the world around us. That quest is brilliantly brought to life in The Oxford History of Western Philosophy.
With spectacular illustrations--including sixteen pages of full-color plates--this splendidly written volume takes the reader on a magnificent chronological tour through the revolutions of thought that have forged the Western philosophical tradition from ancient times to the present. Throughout, the six contributors--an internationally renowned team of philosophers including Roger Scruton, Anthony Quinton, and Anthony Kenny--bring the astonishingly diverse, wide-ranging landscape of intellectual history into sharp focus, emphasizing how notions seen today as part of an inevitable march of ideas were in their own time often considered radical, if not revolutionary. Thus we are treated, for example, to lively accounts of how Plato's "theory of forms" and Aristotle's pioneering exercises in logic broke with the past to irrevocably alter the course of Western thought. The authors also reveal the relationships between landmark thinkers, and the ways they drew on their intellectual heritage. They show, for instance, how St. Augustine and Aquinas, though advancing the cause of Christian doctrine, picked up where their pagan Greek forebears had left off. We witness how, during the Renaissance, the profound empiricist ideas underlying Descartes's famous utterance--"I think, therefore I exist"--lived in a tense but complementary relationship with Locke's rationalist theories. Moving into the eighteenth and nineteenth centuries, the book explores how Hume greatly influenced Kant's conception of the "transcendental aesthetic," and how Hegel drew upon the lesser known (but groundbreaking) work of Fichte and Schelling. The authors bring the story up to our own time, vividly recounting the existential trend from Nietzsche ("God is dead") to Sartre, along with other increasingly fractious schools of thought. Along the way, we not only encounter the vast intellectual riches of the Western mind, but we also meet the personalities behind the great thoughts, from the saintly Hume (described by Adam Smith as having "come as near to perfection as anybody could") to the ill-mannered outcast Fichte. And the hundreds of maps and striking illustrations (including full-color reproductions of art ranging from medieval manuscripts to the works of Raphael, Ingres, and Magritte) form an integral part of the book, revealing the interweaving of art and ideas through the ages, as artists have striven to give visual immediacy to philosophical concepts.
The Oxford History of Western Philosophy is the most authoritative single-volume account ever written for the general reader. Engagingly written and astonishingly far-reaching, it provides the consummate introduction to the intellectual bedrock upon which Western civilization is built.